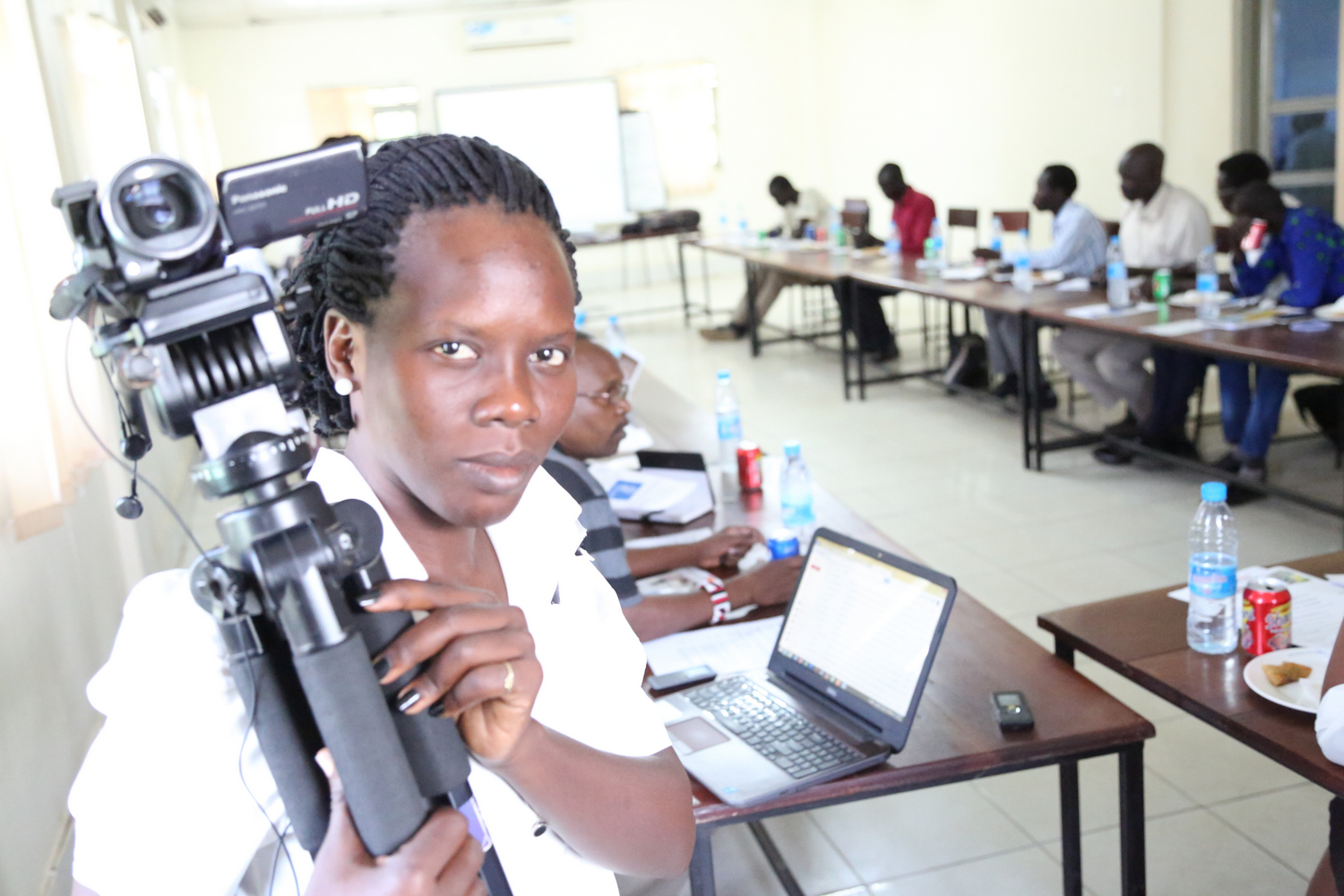 The story of jHUB in short: Riding on the wave of enthusiasm and opportunity that gripped South Sudan after independence in 2011, a group of idealistic, creative youth – primarily Juba University students from a variety of fields and backgrounds – came together to learn and harness the power of media and film-making to help tackle the challenges their new country faced.

As a group they were committed to empowering the communities in which they live, work and study, founding the Kapital Movie Industry Corporation, a home-grown local organisation that would be neither a corporation nor an industry – but an idea, incorporating the urgency to act in an industrious, forward thinking manner to secure the new country’s freedom and aspirations.

In 2015, Kapital, in collaboration with icebauhaus and r0g_agency for open culture and critical transformation were given the opportunity to develop and structure these ideas and take steps to help create a community oriented Juba media lab, Kapital needed to emerge from the isolation experienced by those pushing innovation and progress in a new country, constantly being defied by its own internal struggles and actively join a growing, diverse and collegial network of experienced innovation hubs and technology development labs spanning Africa.

Step-Up Juba Media Lab was conceived to capitalise on the organisation’s strong self-initiated, home-grown practice, as an attempt to support those who need to be the ones teaching, helping and leading by example a nation where the lacks of self confidence, literacy, life skills, technical aptitude and access to information are among the leading hindrances to peace and equitable development.

As part of Step-Up Juba Media Lab activities the planned ‘innovation barcamp’ evolved through seminars 1 and 2 into a series of skills development and East African regional networking events under the umbrella of the #PeaceHackCamp in Juba in 2015.  The #PeaceHackCamp became the first international Open ICT4D (ICT for Development), media and peace-building event in South Sudan, at the same time highlighting the first public manifestation of jHUB as a driver of local media development action.

«There was a room in KAPITAL Movie, it was kind of a garage, but we decided to make it into jHUB. We need to start with something we have already. It’s an open space where each and every youth who has innovative skills or ideas, or, if not but wants to learn, can come around and learn something. Because, we can’t just be waiting to be employed by the government or by the UN or that kind of thing.» (Emmanuel Mbisimo, student, Juba, 2015)

The project was funded by the German Federal Ministry of Economic Cooperation and Development (BMZ) through its programme of “Support for Media, Access to Information and Freedom of Expression”. 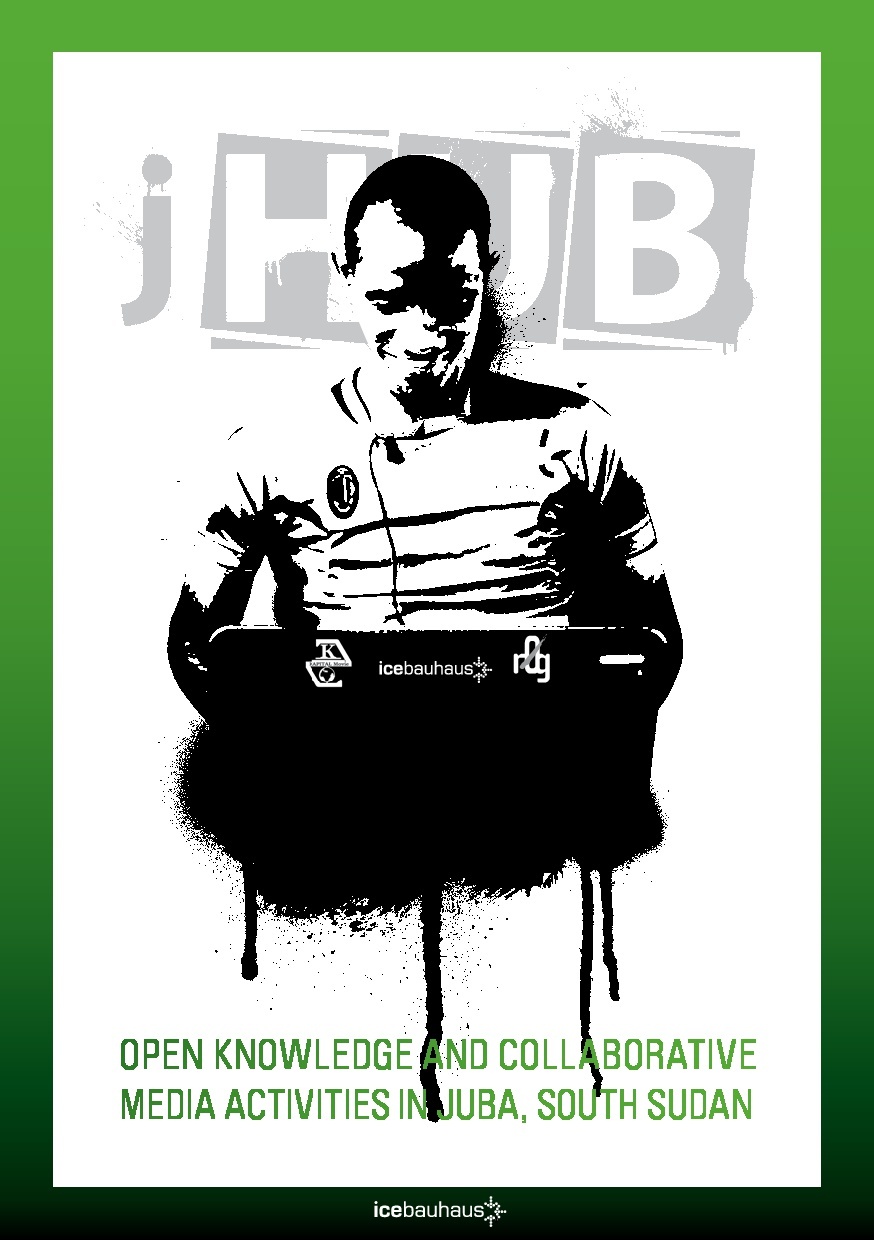 The initiative to create a media lab stems from the KMIC collective, an independent group of young people who have come together to help solve the acute post-independence social, political, educational and environmental challenges arising from 21 years of fought civil war. 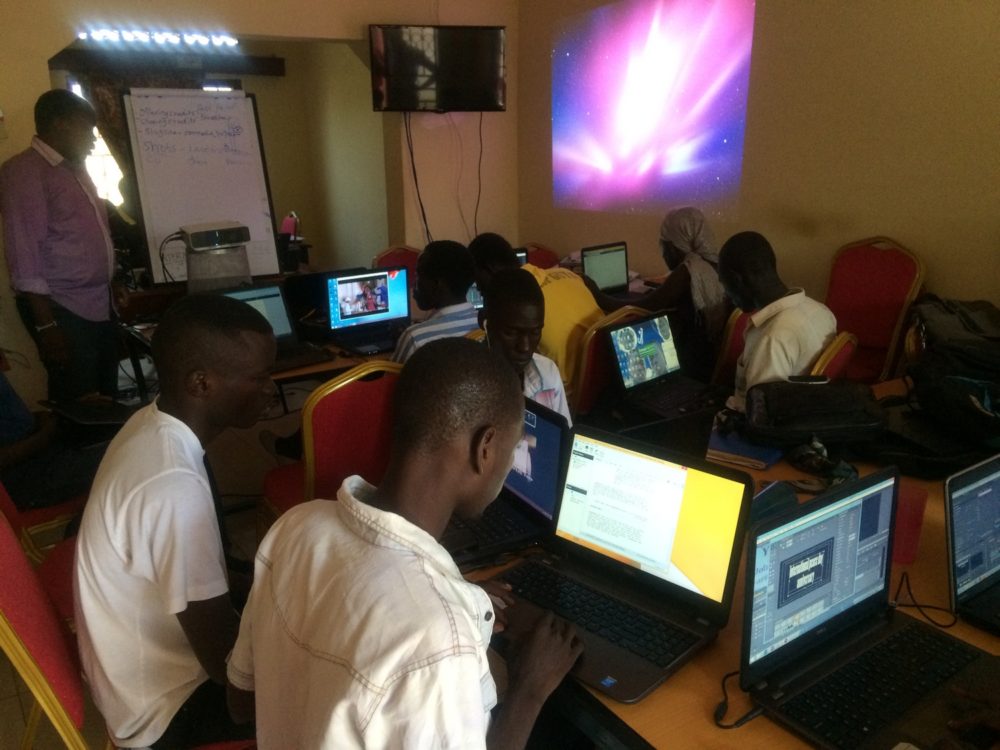 Already constituted as the ad-hoc academy which focuses on film and video production, the initial focus is now on knowledge development through the creation of professional capacity building workshops and hands-on production. 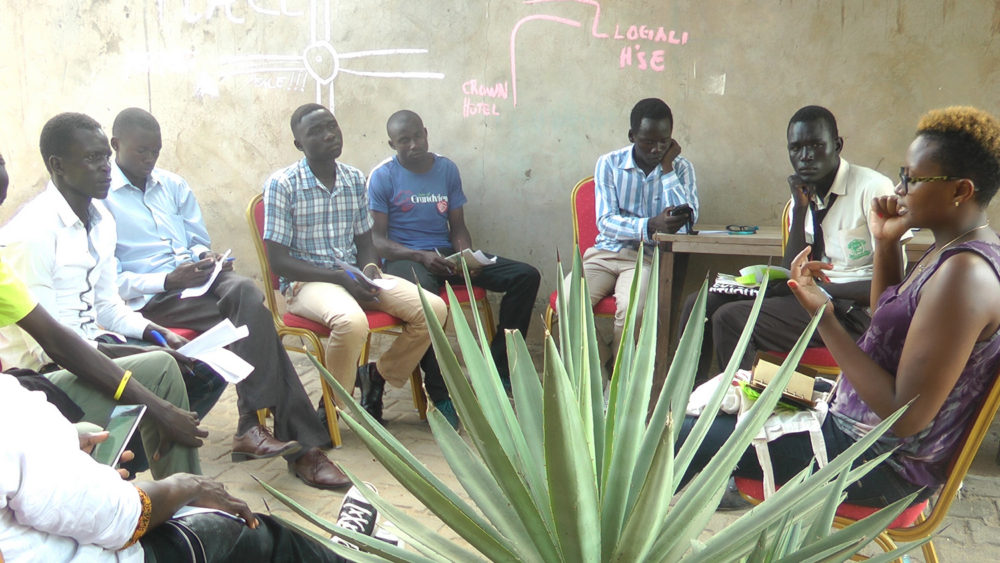 The initiative to create a media lab stems from the KMIC collective, an independent group of students, to help solve the acute post-independence social, political, educational and environmental challenges arising from 21 years of fought civil war. 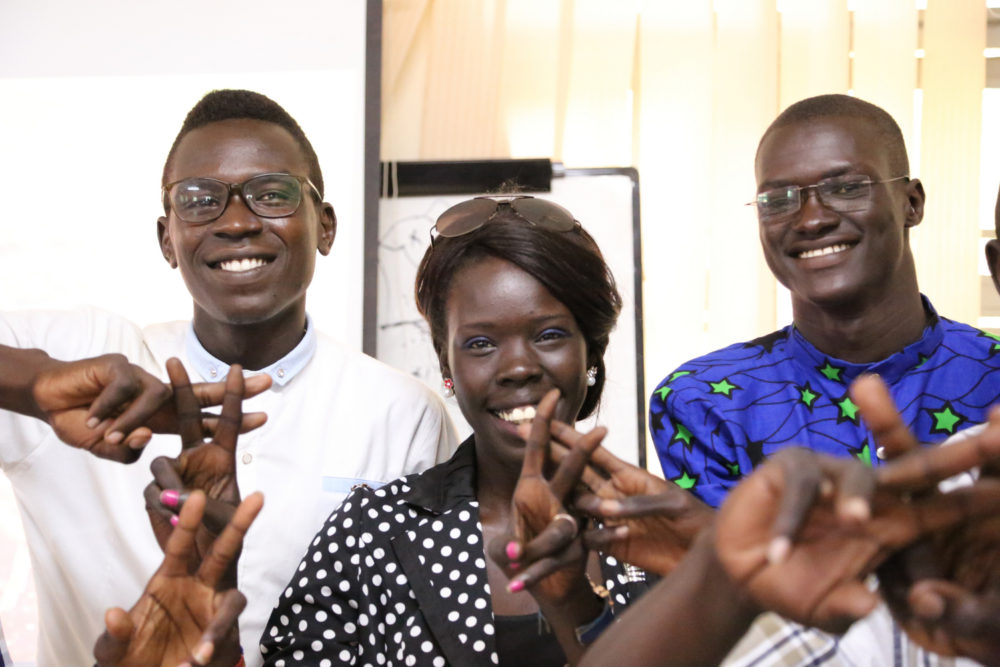 Addressing themes, such as post-conflict national transformation and the building of a democratic, and socially just South Sudan, jHUB’s mission is to provide an open forum to develop solutions to these challenges. 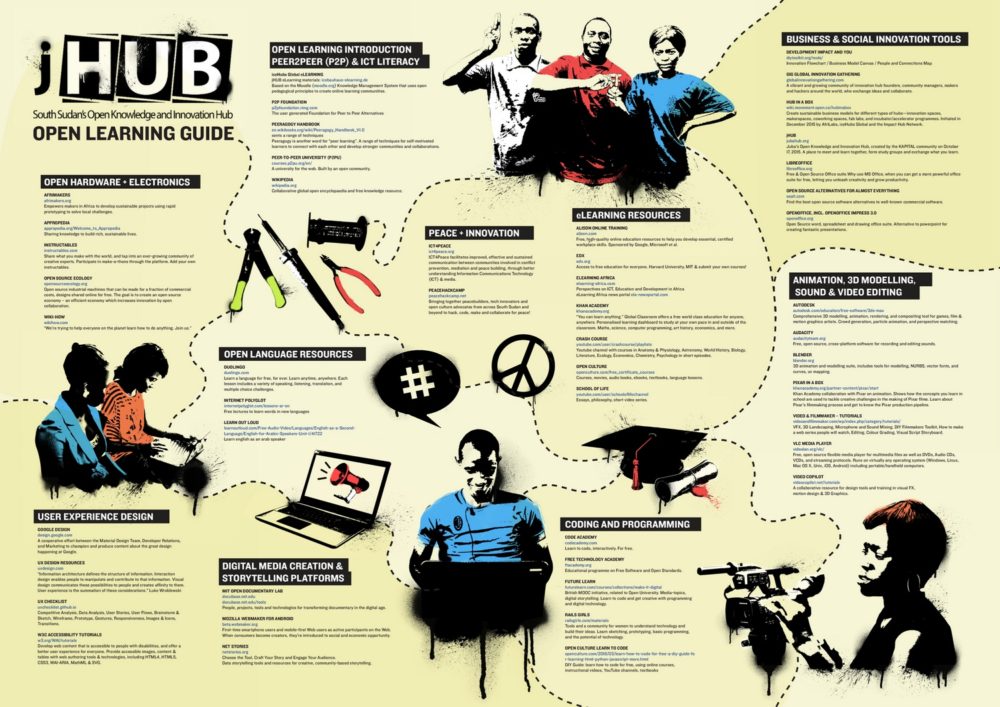 Through the project, different mentors and trainers from the region could join the jHUB team to support the development of the community and organisation. They co-developed the Open Leaning Guide as an putvoem of the ToT in Juba. 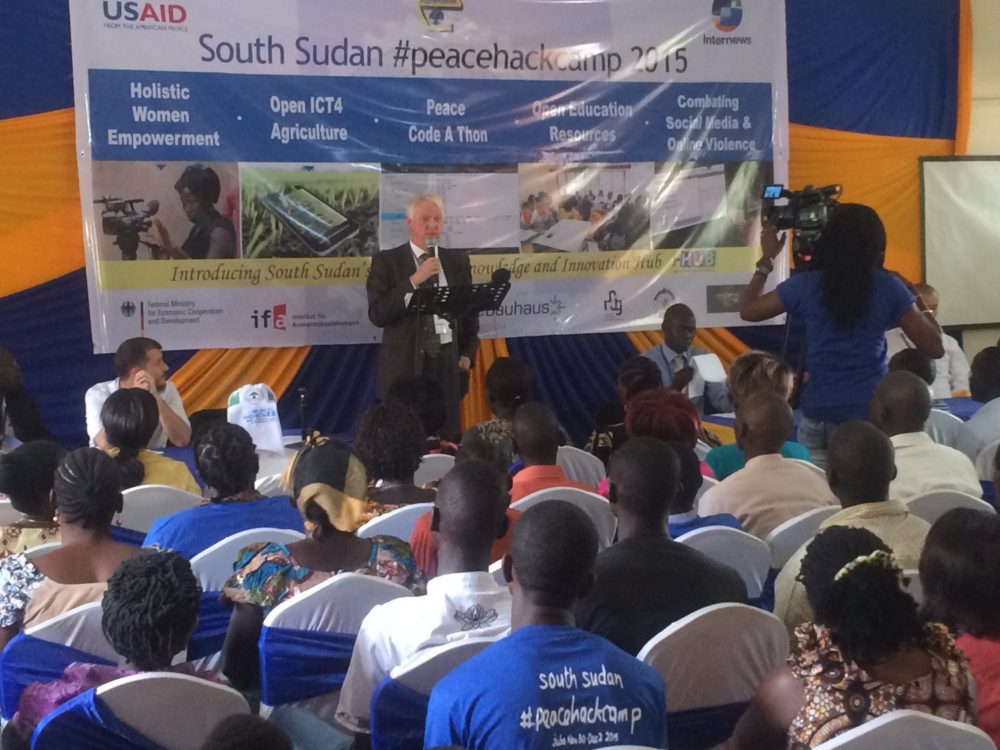 #peacehackcamp was a larger barcamp event organised in Juba by the jHub community together with different local and international partners. 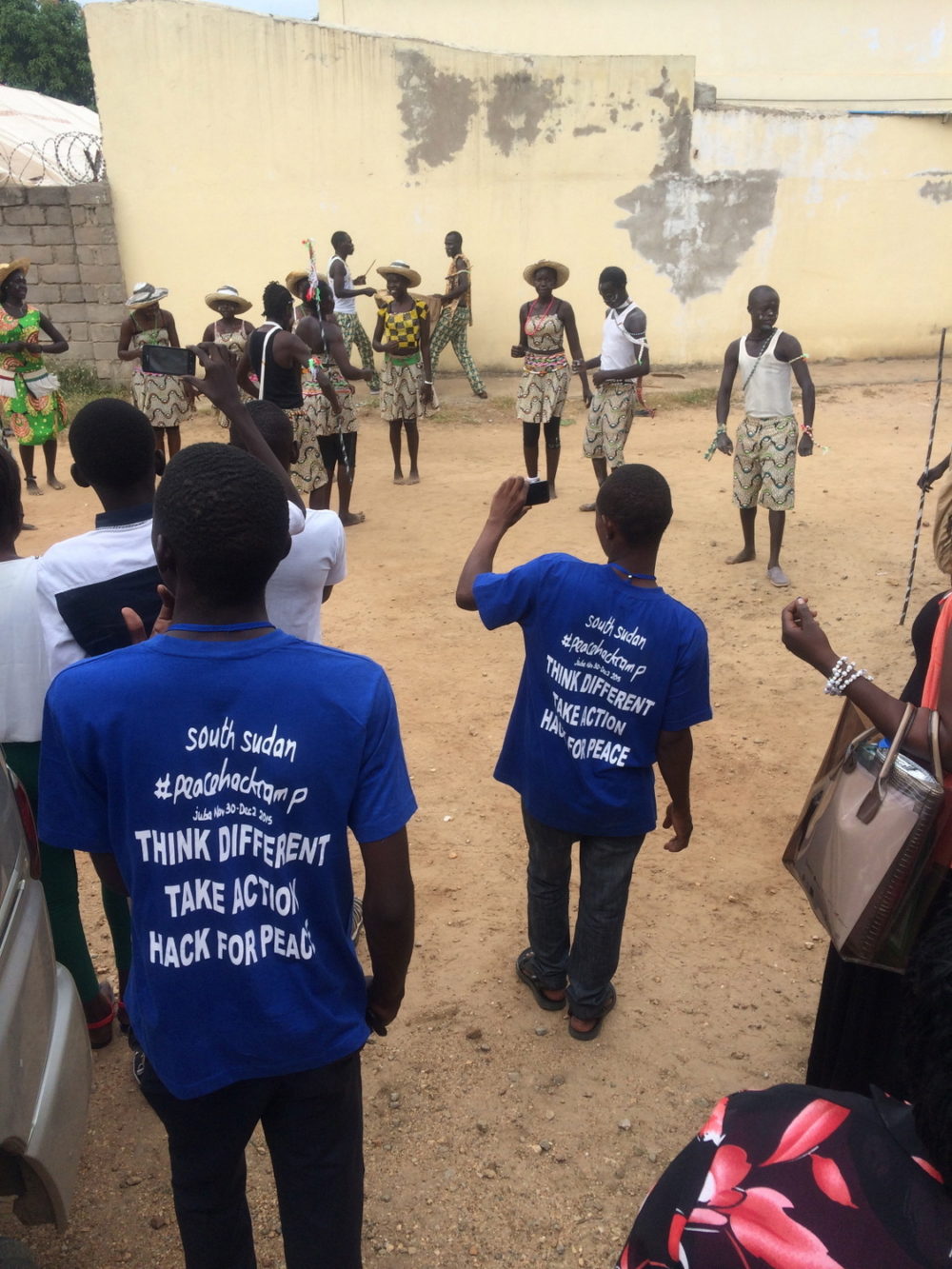 #PeaceHackCamp was an intensive media literacy and inter-communal peace-building project that tapped into open source tools and media for their ability... and cultural perfomances of course.